Language is all around us. We use it every day to express our thoughts, feelings and opinions, to communicate with other people, to convince them of our views, make them feel better or worse, manipulate them or even insult them. Language is a powerful tool which helps us perform our actions. There are more than 6,000 different languages spoken in the world and an estimated 200 different languages are spoken in Manchester alone. It is a truly multilingual city.

On 10 November, the University of Manchester hosted a day on “World of Language, Languages of the World” as part of the ESRC Festival of Social Science. The day was organised by Sascha Stollhans and Eva Adelseck.

During an exhibition at the Royal Exchange Theatre, visitors could talk to leading researchers about different aspects of linguistics and languages researchers, and they had the opportunity to have a go themselves: Was Jack the Ripper just a myth? What can we learn from his letters? How do linguists help solve crimes? How do children learn to speak, and what can research into first language acquisition tell us about the human mind? – These were just some of the questions our visitors learnt more about in an accessible and hands-on way.

Our more than 150 guests (including staff and students from local students) could also learn more about the languages of the world during a poster exhibition provided by undergraduate Linguistics and English Language students at the University of Manchester. There were engaging taster sessions in Arabic, German and Welsh for those who wanted to get to know those languages and learn some basic phrases.In the evening, we hosted a panel discussion on “Bridging the gap between linguistics research and the language classroom”. Panellists and participants discussed important questions such as:

We received very positive feedback about the events. Many visitors commented that it was fascinating to learn more about languages and linguistics and that they appreciated the hands-on nature of the exhibition. After the panel discussions, many participants remarked that it had been a great opportunity to connect with both researchers and practitioners, and some have already started discussing future collaborations.

Special thanks also to the ESRC and for letting us be part of the Festival and funding the event, to Carly Chadwick for her ongoing support, to the Royal Exchange Theatre (especially Amelia Bayliss), to the Division of Linguistics and English Language at the University of Manchester for generously sponsoring a drinks reception, and of course to all our guests!

The event is on Facebook and Twitter (where you can also find more pictures), and find out more about all the Manchester events on the Festival website. 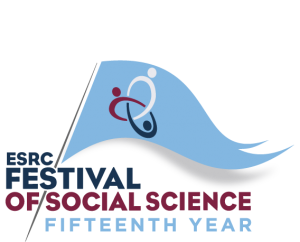